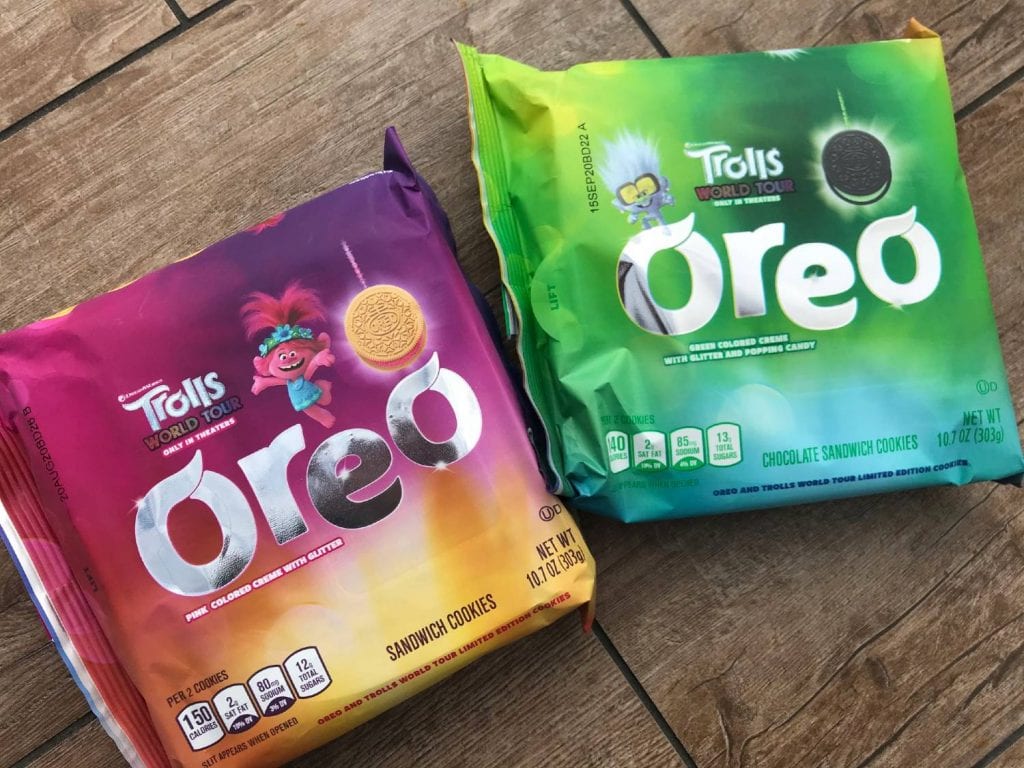 First a little backstory about the movie, then we’ll get to our review of the new cookies.

Trolls World Tour is the sequel to the 2016 smash hit movie entitled Trolls. In this new movie, Queen Poppy and her friend Branch discover that there are six different Troll tribes. Each is from a different land and devoted to a different kind of music: Funk, Country, Techno, Classical, Pop and Rock.

A couple of trolls from the hard-rock royalty decide they want to destroy all other types of music. Poppy and her friends then set out to save they world by unifying all Troll tribes and so they can forever live in harmony.

Now let’s get on with the review!

Let’s start with the Queen Poppy Oreos. They are described as having “pink colored creme with glitter.” 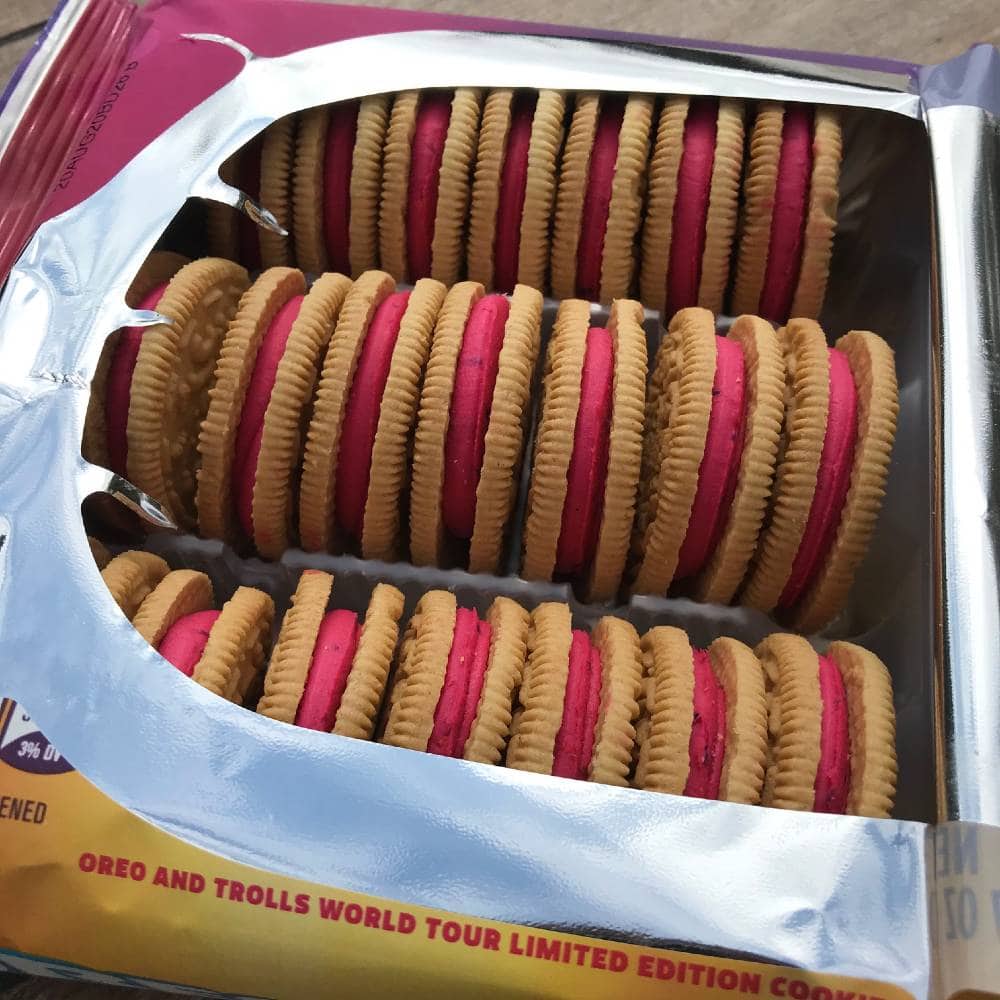 The cookie part is a regular Golden Oreo, both in color and taste. The cookies have the usual OREO logo on one side and one of several Poppy-themed designs on the other side. I found headphones, the words “Music is Life” and what I believe to be a Troll guitar. 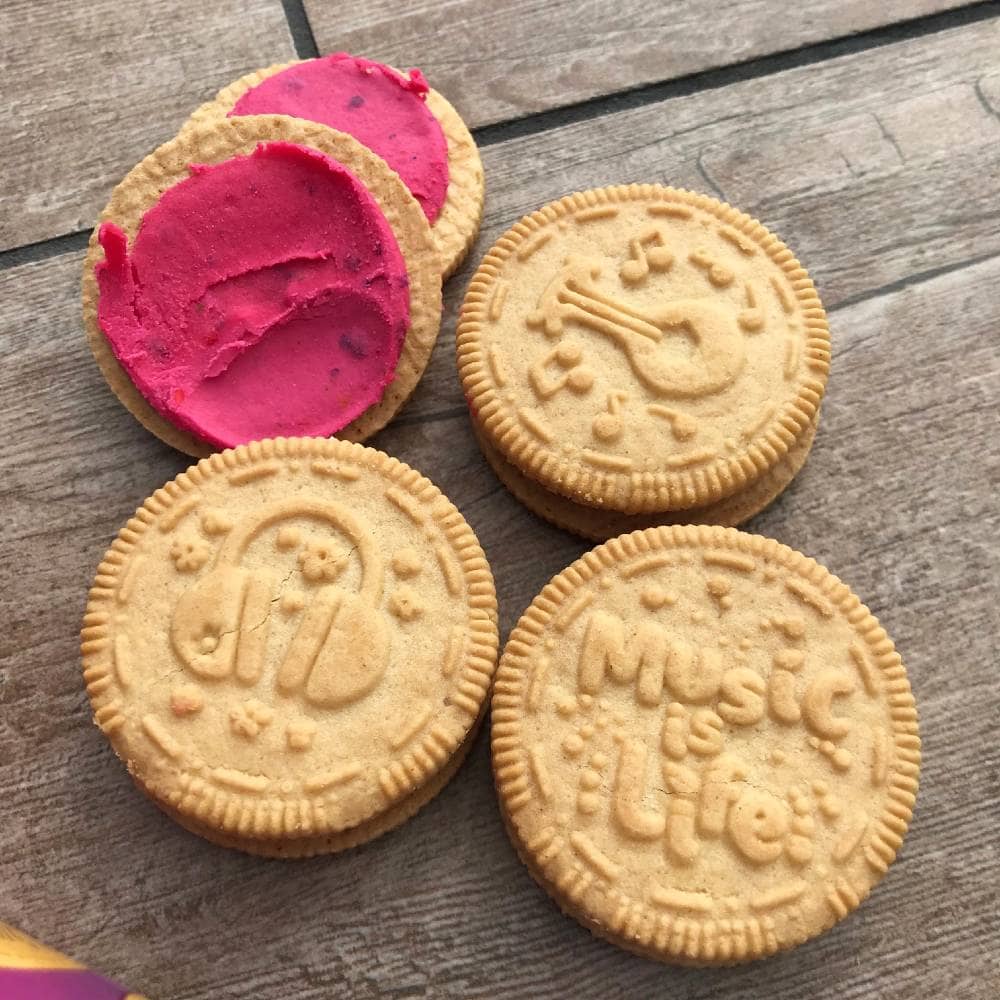 The creme is a neon pink color. The “glitter” is just a couple dark blue or purple flecks of something. It is not shiny, fun or glittery at all. I might describe it more as a sparse confetti, but not glitter. 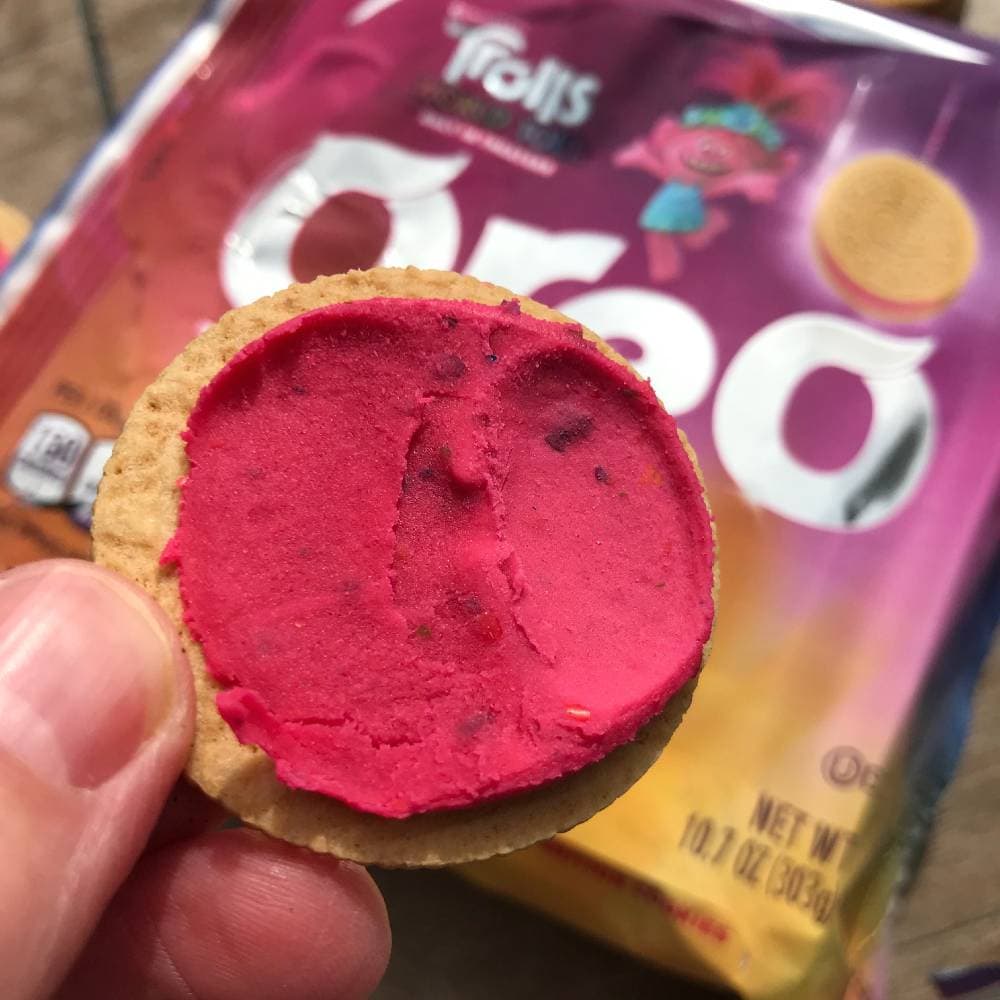 I like Golden Oreos, so I’ll have no problem finishing this pack. Overall, I think the cookies are a cute idea, but would have benefited from something that added more bling. I was expecting glitter, but sadly, these cookies did not deliver on that front.

Next up is the Tiny Diamond Oreo cookies. They are described as having “green colored creme with glitter and popping candy.” 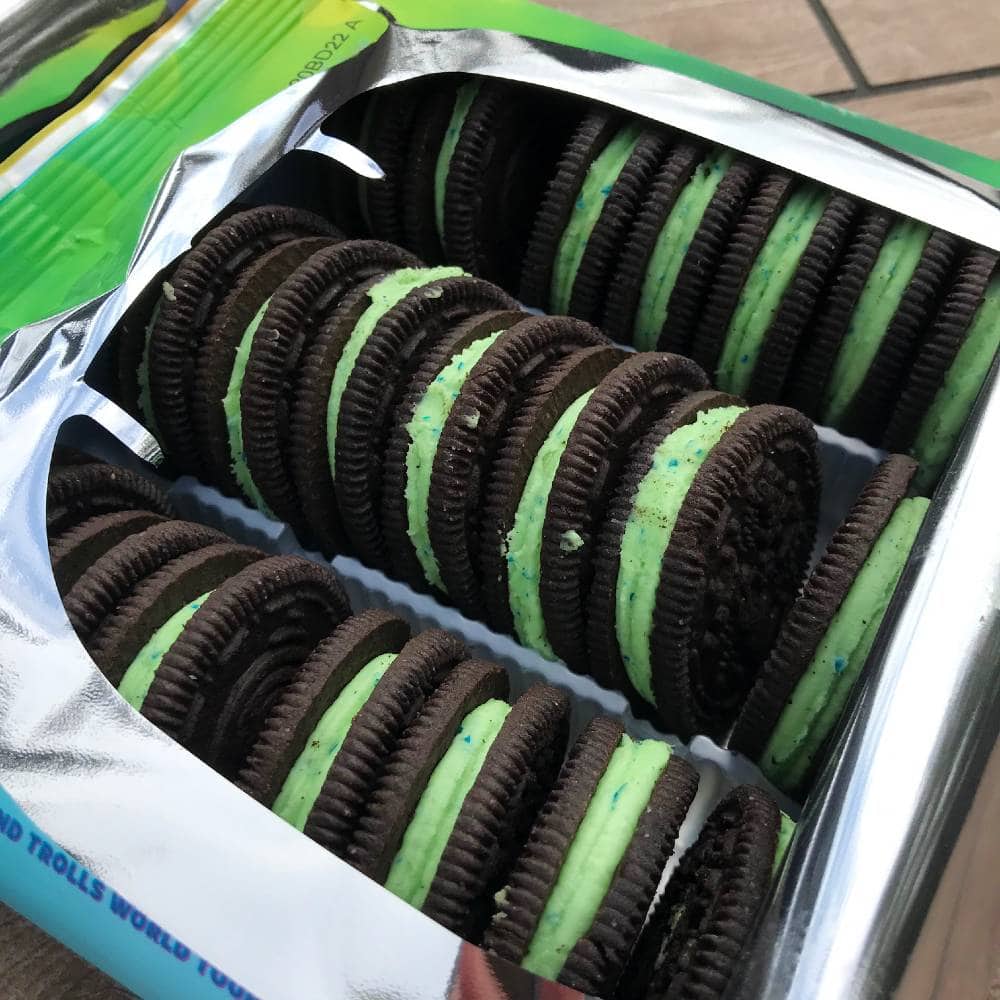 The cookie part on these is a classic chocolate Oreo. The cream is a minty green color. In fact, they look pretty similar to Mint Oreos.  I’d also say the amount of creme is similar to a regular Oreo.

This cookie also contains the same blue “glitter” specks that are in the Poppy cookies. There is more color contrast between the light green creme and the dark blue glitter, so it is more visible in this cookie than the Poppy version. 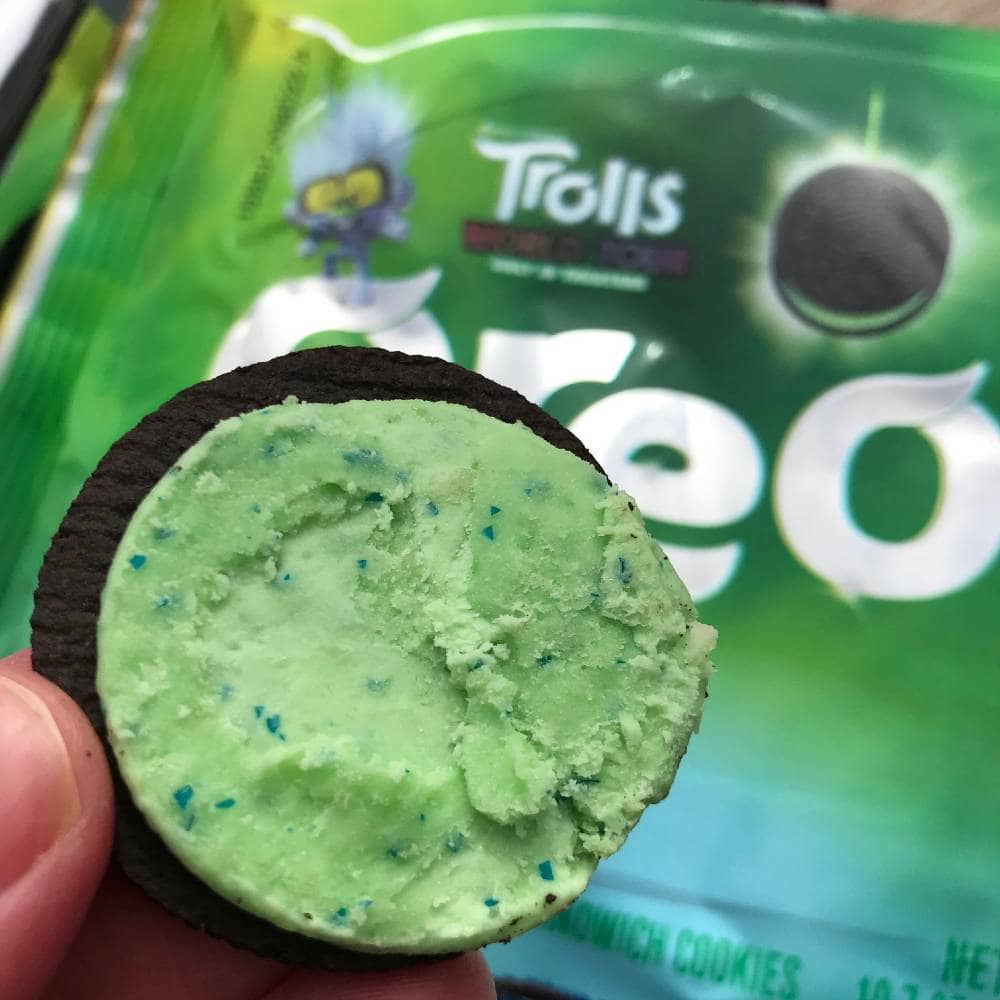 The Tiny Diamond cookies also have popping candy in the creme. The candy doesn’t add anything from a visual perspective.

After taking a bite, I didn’t notice any popping as I was chewing. However, as soon as I stopped, I could feel what is best described as sizzling come from the cookie smashed into my back teeth. A funny feeling for sure!

For the sake of research, I also dunked one of these into a glass of milk to see if the popping action would ramp up. Sadly, the milk bath did nothing special.

I didn’t particularly enjoy the popping candy feeling, but I can see how a group of kids at a Trolls party would get a kick out of it. 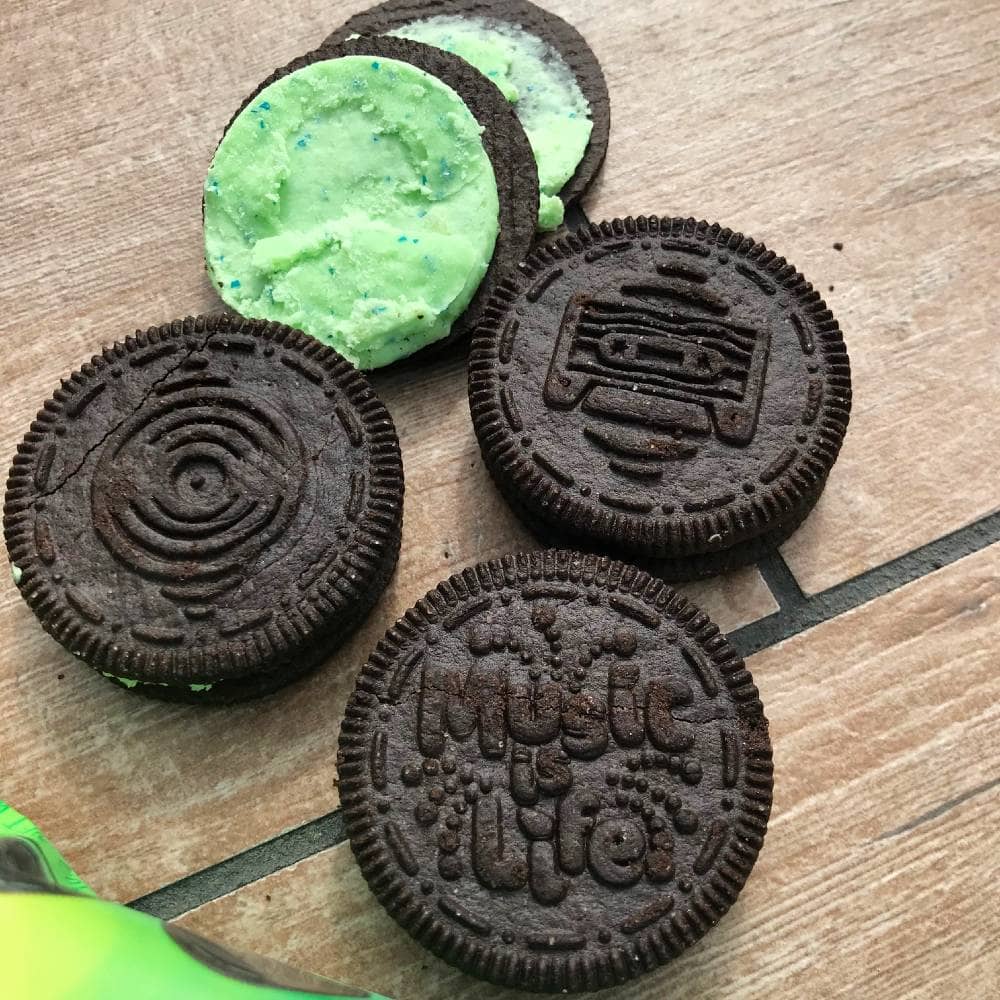 In this pack of cookies, I found the same “Music Is Life” design, plus a spinning record and a cassette tape. I find it funny that the Trolls use cassettes.

I normally don’t get into all the immersive and integrated brand experiences that are used in food marketing these days. However, I took the bait on this one and actually tried out the new Trolls World Tour Oreo Instagram filter.

To check out the augmented reality experience, first grab your pack of Trolls Oreos. Take out a cookie and place it in the top corner of the pack.

It will pop open the Instagram filter.  Use the filter to hover over the cookie and Poppy will appear. 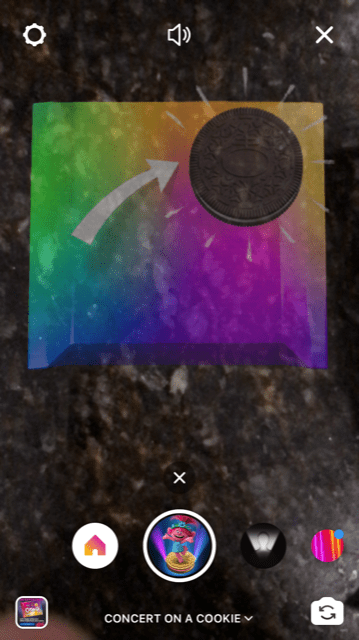 She dances around and sings “Just Sing” which is one of the sounds from the movie soundtrack. 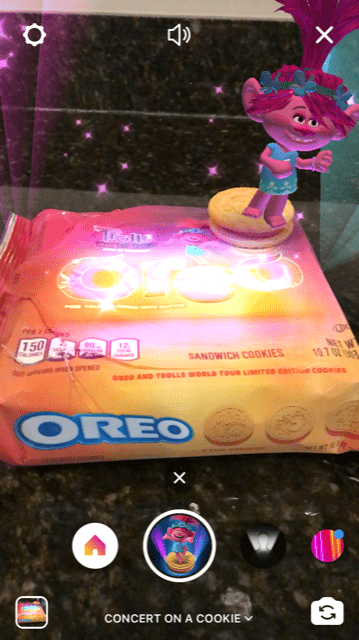 It was actually kind of cool. A total time waste, but entertaining. My 4-year-old daughter drained my cell phone battery by watching Poppy sing, dance and trying to get her to sit on her hand in the “augmented reality experience.”

All in all, Oreo and the people responsible for Trolls marketing did a pretty nice job of creating a fun off-screen experience. Let’s hope the movie lives up to the hype.

Have you tried the new Trolls World Tour Oreo Cookies? Leave a comment below and let us know your thoughts! 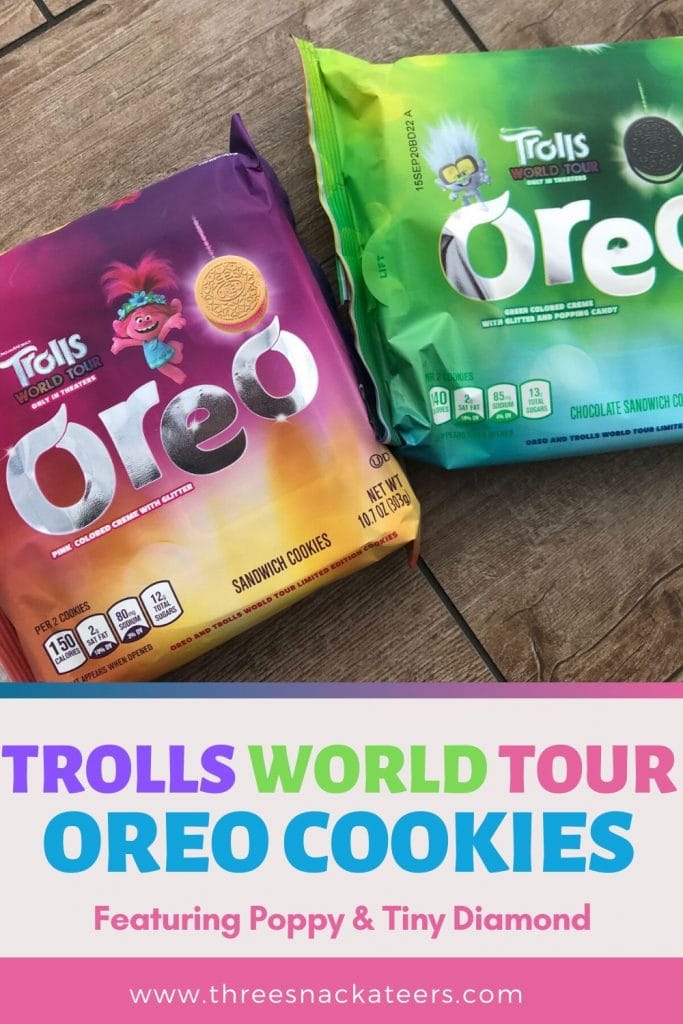