Is it all hype? Is this better than the original Cinnamon Toast Crunch? I had to know for sure, so I went digging into various stores until I struck Sugar Cookie Gold.

I want to begin by thanking The Three Snackateers for allowing me to guest blog here. I’m just a dad who loves snacks and sweets a little too much and decided to make it a thing. So thank you.

But, I know you didn’t come here for me, you came for the cereal. Sugar Cookie Toast Crunch!

Now I have been a Cinnamon Toast Crunch (CTC) fan all my life. It was one of my favorites growing up and still is today. I was not fortunate enough to try the Sugar Cookie Toast Crunch when it came out years ago, but now I bring my “A Game” when it comes to snacks and sweets. And there has been a lot of hype around this particular cereal.

But is this over-hyped or is it the real deal? So without further ado, let’s dive in. 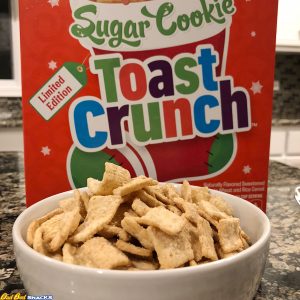 The box is lovely and very festive. I love the red that stands out on the shelf against many other cereal boxes. The cereal itself looks just like regular CTC except without the speckled cinnamon. This is to be expected.

But the smell is where everything starts to change. I don’t get the normal super-strong sugary smell with a hint of cinnamon, this actually smells like a sugar cookie! Score one for CTC.

When tasting the dry cereal, I was happy to see it did also taste like a sugar cookie too! It was subtle too. Similar to the sugary-ness of a snickerdoodle that’s not CRAZY sweet but definitely a sweet cookie. I wonder if they wanted it to be subtle so people could eat more. Either way, it’s good! 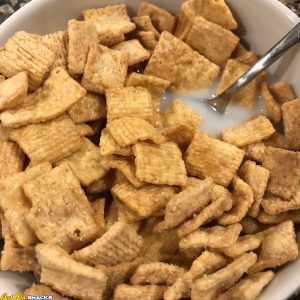 Once I added milk to the equation things became subdued and faint. The flavor started to hide as the milk soaked in. I obviously finished my large bowl and had to pour another just to make sure that I perceived it all correctly. Or maybe it’s just that I love breakfast and so does my internal fat kid…

Which ever is true, maybe both, I was correct in my perception. The milk diluted the taste of the cereal. I guess it’s an obvious issue, but you would’ve thought such a powerhouse cereal company would’ve compensated for that. Oh well. I would like to add though, that pouring two bowls into the same bowl and reusing whatever milk possible did make that milk taste really good. That is something I highly recommend.

So if you are a big CTC fan, a big cereal fan, or just like to try new things like me and the rest of the snack nation, then I recommend you go find Sugar Cookie Toast Crunch.

But if there’s any doubt on how big of a fan you are of things like this, then you can probably go without and live your life just fine. Maybe it was all the hype built up around the cereal, but I was not blown away.

Should you buy the General Mills Sugar Cookie Toast Crunch?

My answer is maybe. I’ll give this a 7/10 because they did hit many of the needed marks, but I feel they could have dialed up the flavor a bit more. The original is better still, but nice work General Mills, I look forward to your next creation!

I found this at Walmart, but Target Stores and some other small select stores should be stocking up on this as well.

Have you tried the Sugar Cookie Toast Crunch Cereal?

I would love to hear your opinion and I encourage you to comment below. Once again, thank you to Three Snackateers for allowing me to guest blog. And if you want to find more local snacks and see what’s coming out or if you’re curious what food to celebrate for the day find me on Facebook, Instagram and soon-to-be Twitter! #dadbodsnacks 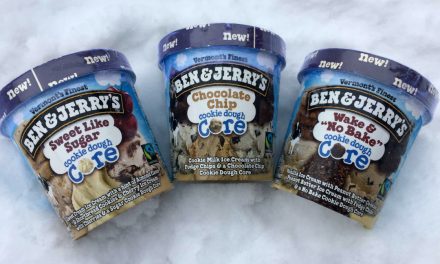 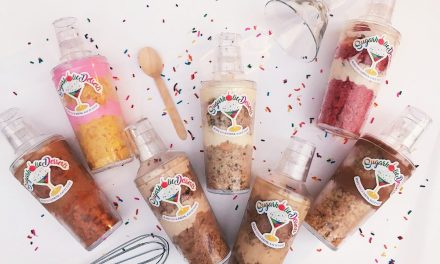 With Caketinis, You Can Have Your Drink and Eat It Too! 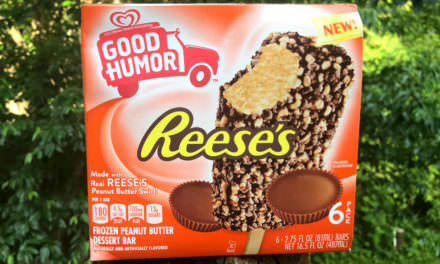 Spotted these beauties in the Walmart bakery this